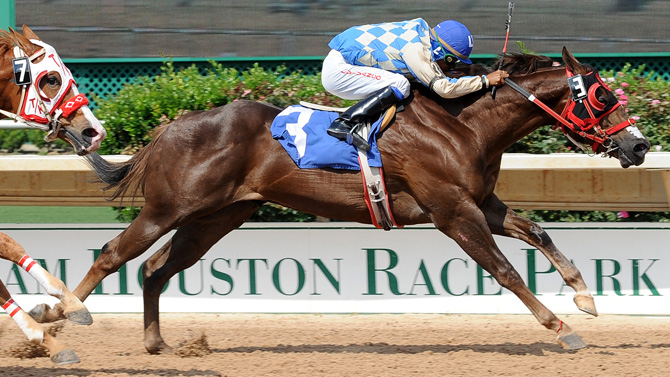 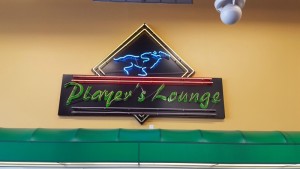 Recently, we were contacted by the Sam Houston Race Park about one of their signs that was giving them trouble. The sign in question, the gigantic neon sign over the entrance of The Players’ Lounge. Featuring their iconic racing horse, text, and some nice embellishments, only part of the nearly 20-year-old sign was working. The sign was turned off so that its appearance would be consistent, and their search began for a sign company that could solve their dilemma.

Every sign company they called gave pretty much the same response: “Neon, oh no, sorry but we do not work on Neon. And we do not know anybody that does…”. After contacting over a dozen sign companies they finally heard ‘Monarch Sign & Graphics, how can I help you?’ ‘Neon, yes we can help with your neon sign, can you tell me a little more about the issue?’

After a short conversation about the non-working sign, we scheduled a time to inspect the sign and do our best to diagnose the problem.

SAFETY NOTE: A neon sign runs on between 3,000 and 15,000 volts and 30 to 120 mA. If you are not trained in diagnosing and repair of neon signs, it should not be attempted. The number of amps and volts potentially running through a neon sign are more than sufficient to result in death. 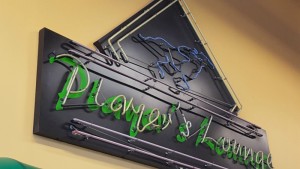 Inspecting the Neon sign, all power has been disconnected

Starting by having them turn on the sign briefly to see how the sign was performing, we began a series of testing to isolate the problem. The next step was testing every neon tube in the sign with specialized test equipment to make sure make sure they still showed signs of life and did not have hairline cracks that had let the gas escape. Fortunately, the test results were great! All of the tubes responded well to the test showing that the neon gas was still intact. Following this test, we moved to the power supplies…

For this part of the test, it was required to turn the sign power on to test the circuitry. The first transformer responded well to testing, good power going in, good power going out, and good power returning. The second one did not pass testing, and also let us narrow down the problem. With plenty of power both in and out, we could not detect any power returning. The culprit, a bad wire somewhere, but where, this was the new question…

The power was again switched off to the sign to allow for further diagnostics on the wiring. (It is important to note that even though power is switched off, it is still important to use extreme caution when handling neon signs. The glass tubes used to make these signs can be very fragile and break easily, creating a new set of problems.) A short time later, the culprit was identified and replaced. The end result? See for yourself in the picture below. 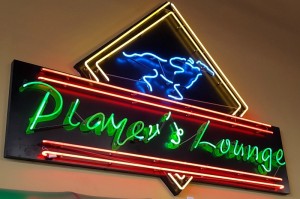 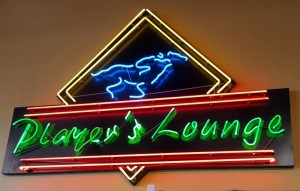 At Monarch Sign & Graphics, we do not only manufacture the highest quality of indoor and outdoor signs; our in depth knowledge of signs also makes us the ideal choice to diagnose and repair your existing signs. Do you have a sign that is not working? Give us a call today at (832) 462-6872 and let one of our technicians get you back up and running.

Monarch Sign & Graphics, Transform Your Image, Stand Out, Get Noticed!!!